A Tech of Our Own

Last night, we (meaning the DKC and my colleagues in the Division of Teaching and Learning Technologies) hosted a premiere of a short horror film that we shot in May of 2016. We developed the script over about three weeks, shot the movie in one day, and then took over a year to get our acts together and finish editing it. In fact, the only reason it WAS finished was because of two amazing new students who split their time between tutoring in the DKC and supporting DTLT, Stef and Bethany. They started only two months ago, but they began working on the movie almost immediatley and, in collaboration with Jess Reingold, masterminded a pretty amazing event last night. We had a nice turnout in the Digital Auditorium and it was incredibly satisfying to be in a room of people enjoying The Convergence.

Because the film starrred several tutors who have since graduated, several returned for the event. I found myself in a room with eleven current and former tutors -- all amazing, intelligent, creative young women. We took this picture to commemorate the evening. 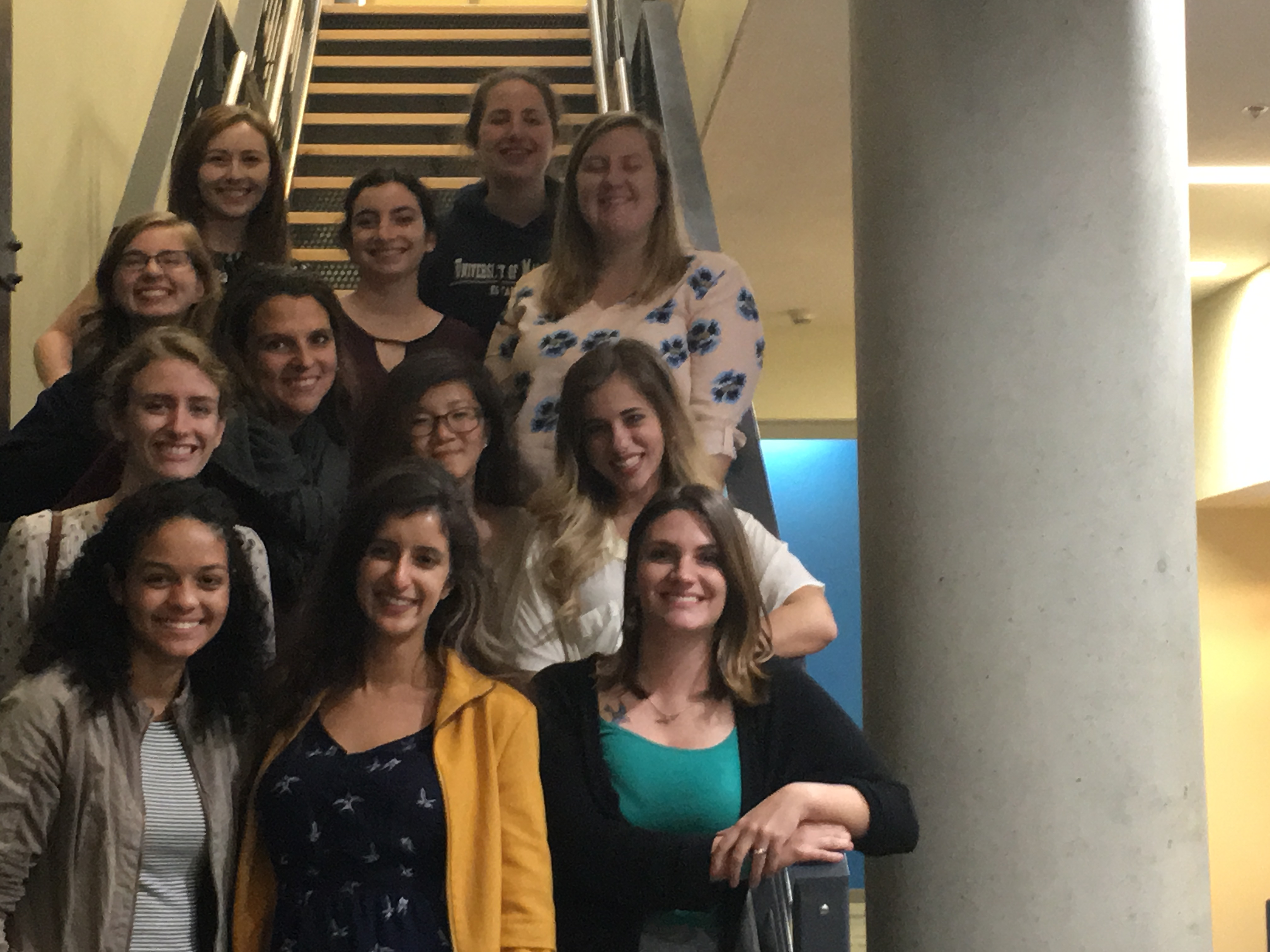 Seen in that photo are Anna, Jess, Elaina, Jenn, Meredith, Callie, Stef, Claire, Chelsea, Kutoof, and Bethany. There are even more who couldn't be at the event: Maggie, Nora, Amy, Emily, Janaye, Dominique, Eliza, Abby, and Jacqueline. In fact, overwhelmingly the employees of the DKC have been female students.

This isn't necessarily surprising (UMW's roots are as a women's college, and we still have more female students than male), except that we are a tutoring center for digital technologies. And, quite frankly, we still live in a world in which men dominate technology fields.

Last spring, I presented at Keene State College, and in the middle of my presentation, the college librarian interrupted me to comment on this picture of the DKC tutors:

What she remarked upon was the fact that the majority of these students were women -- tutoring in a technology-focussed support center.

I want to back up here a minute and say that my own history with technology is complicated. I spent my high school years attending a magnet school for science and tech, where I was one of those outliers who preferred writing, drama, and choir. My four years at that school were transformative in wonderful and awful ways. I got a great education; my self-esteem was in shambles when I graduated. Within six months of starting college, I had chosen to major in English and leave the sciences and technology in my distant past. But my senior year of college I was introduced to the Web, and then there was no turning back.

My graduate degree is in instructional technology. Yes, that's about technology but it's also about teaching, which means it's "soft." It's not programming on a super computer, which is what the "real" students at my high school aspired to.

And sometimes I get a sense that the perception of the Digital Knowledge Center is that the technology work we do is the "soft" kind -- the womanly kind of tech. It's not serious technology. It's applied technology -- teaching people how to create Web sites and edit video, not program and code.

But let me tell you something about the young women who work in the DKC. As a group, they are some of the most amazing people I know. They are brilliant and creative and compassionate and hard-working and incredibly successful young women. They are English majors and computer science majors and business majors and Spanish majors and Digital Studies majors and psychology majors and biology majors and history majors and art majors and ,oh, double majors in biology and German with a minor in chemistry. Who just happen to also tutor their peers in the use of digital technology on a range of topics from WordPress to video editing to infographics to 3D printing.

And their use of technology? It isn't "soft." It is deeply human and nuanced and strong and powerful.

They are who I wanted to be when I grew up way back when I was in high school. And I still aspire to be them.

(I assume it goes without saying that I have also had/have incredible young men who work in the Center. But this post isn't about that.)