This fall, I'm teaching a first-year seminar titled "Beyond the Selfie." It's an exploration of digital identity and digital culture with an eye towards getting students to think more criticaly about how they live online -- and how online spaces actually function not only in their own lives but in our larger culture.

I've loved teaching this class the last few years because it's revealing to talk to students about these issues in greater depth, and it's been fun to experiment with the sequencing of the topics and the assignments that go with our investigations.

This year, I swtiched things up quite a bit, pushing some of our deeper, scholarly readings until later in the term, so that students would have a chance to get a bit more oriented to some of the subject matter first by reading articles from main-stream newspapers, journals, and news Web sites.

Last week was the pivot to scholarly reading, and we have five topics that we'll be working with. Working in groups, they will be responsible for leading class discussion on one of the topics, and we've already talked through what makes good class discussion and had a visit from a tutor in our Speaking Center to address that issue.

For the first topic, though, I always lead the discussion with the aim of modeling for them a bit of how this can be done effectively. The topic for the first week was "The Internet in Authoritarian States" and I had assigned two journal articles for them to read prior to class. The first, "Cyberspace Under Siege" by Ron Diebert offers a nice overview of the ways in which authoritarian governments attempt to shape and control internest consumption. The second, "Networked Authoritarianism and the Geopolitics of Information" focuses specifically on Russia has approached information control in the age of the Internet. I picked the latter in particular because, with all the discussion of Russia's interferencey into the 2016 U.S. election, I wanted my students to spend sometime with a more scholarly consideration of that country's history with Internet control and misinformation campaigns.

When it came time, however, to figure out how to frame the classroom discussion, I knew that I wanted something more dynamic than just me prompting them with particular questions. I also wanted to set the bar a bit higher in terms of how the student groups might approach their own topics. And, finally, I really wanted to get them thinking about the complexity of this issue from the standpoint of governments and citizens going through the implications of Internet control.

In the end, I decided to run the classroom discussion as a conversation prompted by a simulation game. I invented a fake country "Selfieland," with a very brief backstory and I brainstormed 14 individuals from that country, broken into four groups (corresponding to my student groups). On the day of class, each student group randomly chose a group from the game, and then each group member randomly chose an individual identity that they had to play.

Prior to class, I brainstormed 11 scenarios, many of which built upon each other and I ran the game by announcing those stories and then having each group (or sometimes a single individual) respond to the scenario. Other groups/individuals could also chime in with their own responses. As the game unfolded, I went into the presentation and quickly modified a few scenarios so that they would make more sense.

The whole thing took about an hour, and I think it was a pretty big success. A few students asked if we could approach every class discussion with a game like this, but, more importantly, I think they were forced to grapple with some of the complexities of these issues: the difficult situations that governments find themselves in (and often place themselves in), how Internet control can make for strange bedfellows (for example with the Activists group and the Extremists goup found themselves agreeing about the Government's increasing attempts to control information access), and what it's like when you discover their is actually a traitor in your midst or you've been lied to.

Below, I'm sharing the activity handout I created as well as the slideshow of the scenarios. Let me end all of this by saying, I am NOT a political scientist (if that isn't obvious). The scenarios are, I know, pretty simplistic. Partly that was because we needed to play through this in an hour, but also it was because I wasn't confident that I could develop really elaborate scenarios that were true to the kind socio-political complexity of these sorts of situations. But, if anyone wants to try this or just see how a game like this could be developed, I thought sharing might be helpful.

(I also included a couple of pictures of the game being played.) 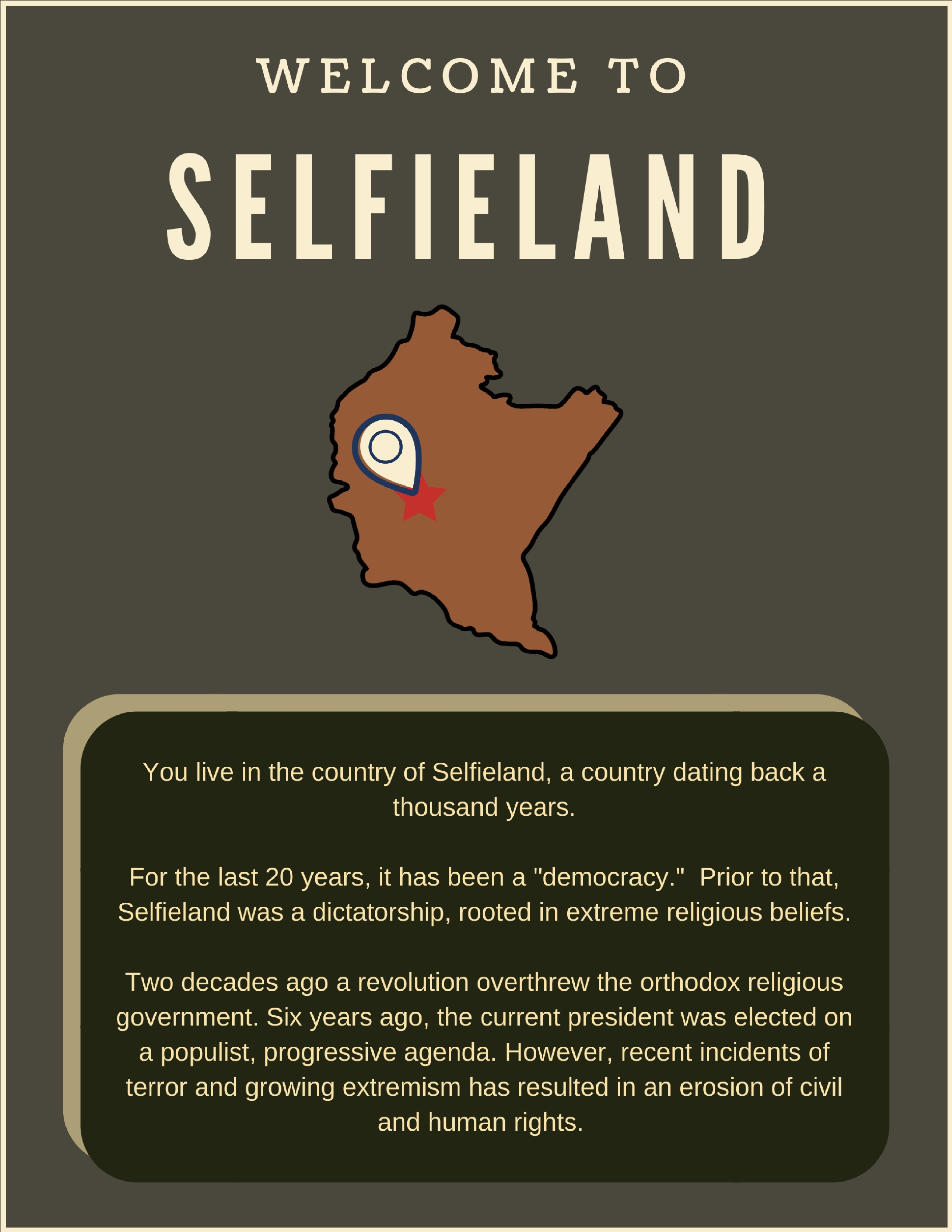 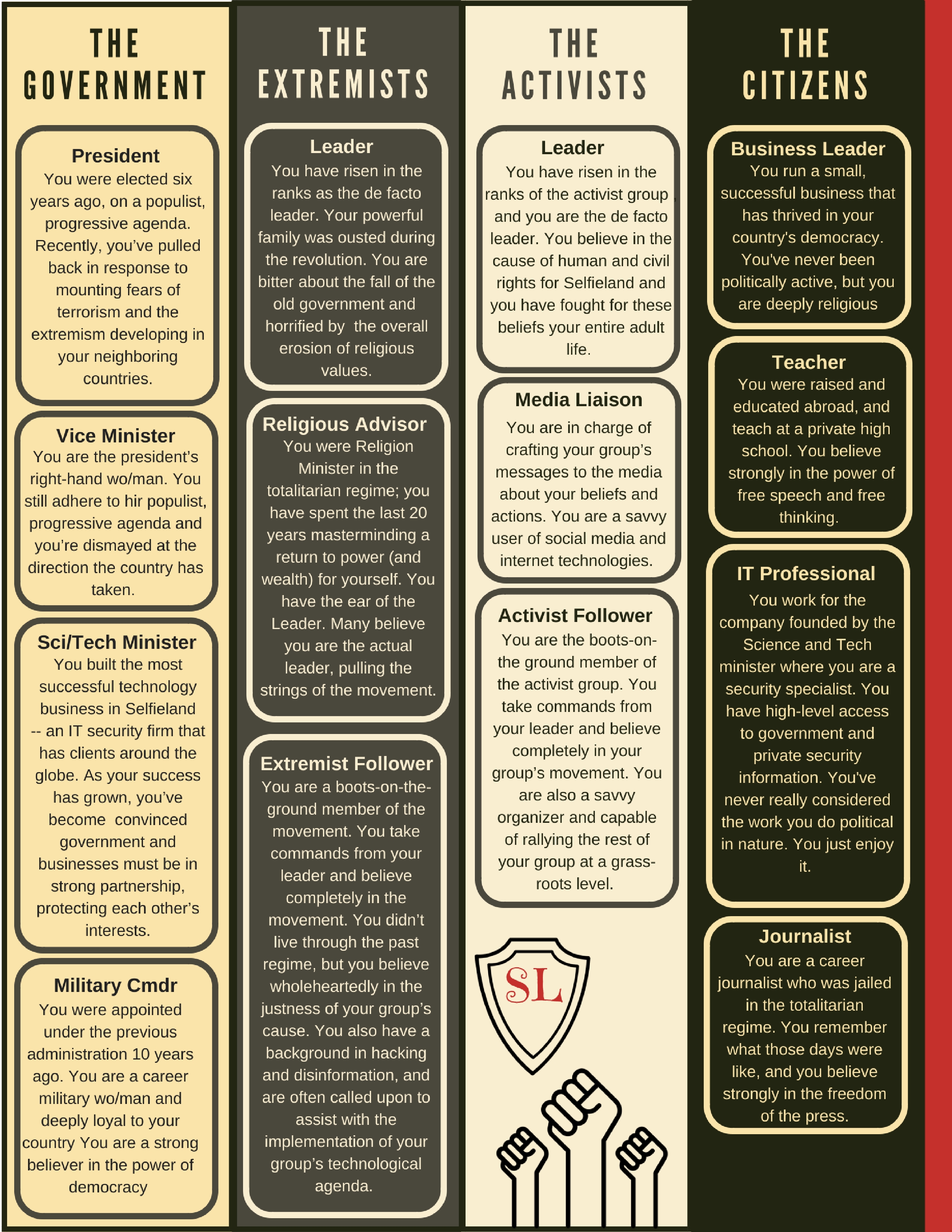 PDF of the Scenario Presentation